There was a surprise in the 11/30 Transportation & Public Works committee meeting: a new design for Riverside Avenue.  The most recent design had appeared on the city’s project page after the most recent set of public meetings in October.  At the same time previous layouts were removed from the project page, which is a shame because they would have provided an interesting history of the process.  The design that appeared in October is still up on the project page, but after the TPW meeting, a new layout appeared on the committee’s agenda.

Riverside may be the most progressive street design that has yet been developed in this city.  It accommodates all modes of travel more than any existing street in the city currently does, and it does so in a way that manages automobile traffic more safely.  The design as a whole has been good from the start, and the latest version has some improvements and some regressions.  Let’s explore them, shall we?

I created graphics of the significant changes from the last layout available for public comment to the layout approved at the Transportation & Public Works committee meeting Monday.  (Those links should stay active for a while because the city archives the council meetings for at least a year.)  In the two graphics I made, the final version is on top and the previous layout is on the bottom.  I tried to get them as close to the same scale as possible, but couldn’t get it exact because they were saved to different resolutions.

The first significant change is the segment between Cedar and 19th Aves, and it’s a doozy.  Through all the iterations of this design that I’ve seen, Riverside had three westbound lanes at Cedar (left turn, through, and right turn).  I could never see the reason why – almost all traffic turns right here, and only a smattering goes straight or turns left.  This is logical: Riverside’s diagonal orientation to the street grid means that if you turn left here, you backtrack.  Through traffic goes to to a small warren of local streets, and as such the only traffic count I’ve seen (from a presentation sponsored by Transit for Livable Communities) gives an aadt of 400 for the segment west of Cedar, compared to 8,000 for Riverside east of Cedar.

The final layout gets rid of one of those lanes by combining the through and left turn lanes into one 12′ lane.  This allows for the continuation of the bike lane through the entire block, which would have been a glaring omission.  It also allows for a massive bump-out at the northeast corner with Cedar, which will relieve the existing congested state of the corner (16th highest walk count in TLC’s 2009 count, which is impressive because it’s neither downtown nor on a college campus).

Unfortunately parking is retained on this block, jeopardizing pedestrian safety.  There are four busy curb-cuts on this block, and all four neighbor parking places in the approved plan.  Especially at an intersection with a lot of turning traffic like this one, it is likely that an already distracted driver will miss a pedestrian who may be partially obscured by parked cars.  The city’s own safety statistics bear this out.  Parking can be accommodated safely, and even contributes to safety in the right circumstances.  But this block has too many driveways and too much turning traffic for on-street parking to be safe.

On the whole, though, the design of this block has something for everyone, even if it doesn’t meet the City’s own pedestrian design guidelines.

The other segment that changed significantly is the block or two between 23rd and 25th Aves S.  The final layout here will be less safe than the previous layout, so it would have been nice to have a chance to comment on it.  As lead engineer Chris Engelmann told the Transportation & Public Works Committee, the primary change here is that parking that had been on both sides of the street in the early designs was moved to the south side.

The Public Works department’s attitude towards on-street parking is implicit in a list of the benefits of that facility that was included in the Design Guidelines for Streets & Sidewalks.  On-street parking is the only facility that was singled out to have its benefits listed in that document.  Certainly many of the listed benefits are valid, but only if the parking is used.  If no one parks in the on-street parking, then it is just a double-wide through lane.  Typically, a street needs dense residential or commercial uses directly on it for on-street parking to be used around the clock.  Riverside east of 19th has neither.  Certainly during business hours, the institutions that line Riverside will keep on-street parking spaces full.  But at night the spaces will be, as they are currently are, sparsely used.  This segment, especially since it is about twice as long as a typically block, will be ideal for speeding.  By contrast, the previous layout had parking on both sides, in essence creating bump-outs that framed the parking bays.  This makes the road space feel more constrained to someone driving a car down it, likely encouraging slower driving.

After construction, transit users on Riverside will notice the wider stop spacing in the new plan.  That is a good thing:  currently they are much too close together.  Jarrett Walker has written that the ideal stop spacing is 400m.  Today, the stops on Riverside are around 150 or 200m apart: 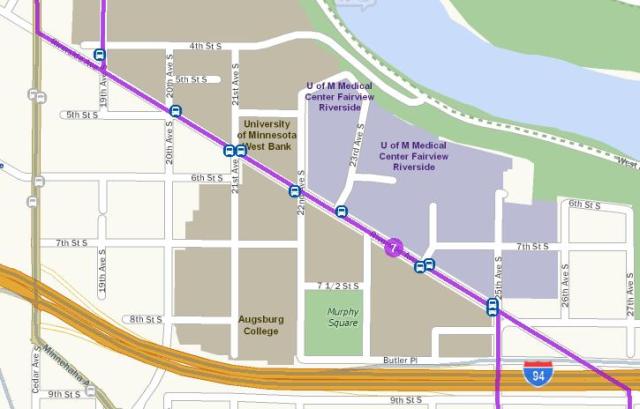 The approved layout is basically the same.  All it does is remove the westbound stop at 21st Ave S (possibly a mistake, since they left the eastbound stop), and moves the eastbound stop at 25th to the east side of the street.  The latter move is actually worse for transit riders, as it forces people coming from the largest local trip generator (Fairview) to cross two segments of the intersection, rather than one: 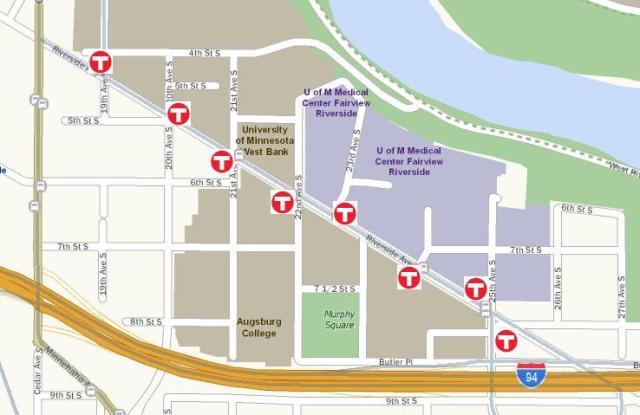 Metro Transit has only shown sporadic interest in stop spacing, but here’s how I would do it if they wanted to get to 400m: 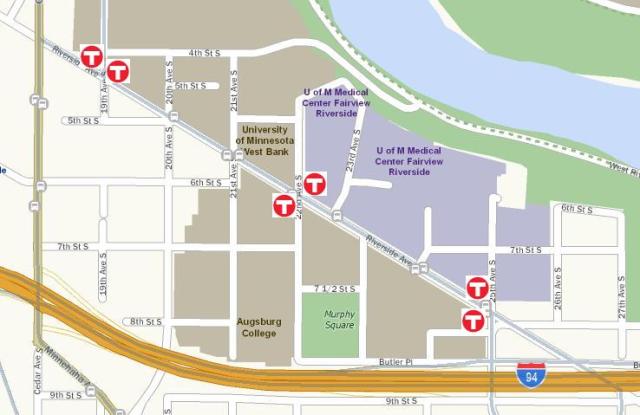 It may seem like it is too far from trip generators and destinations for mobility-impaired persons, but actually the stops are well-placed to take advantage of pedestrian routes in the area (unfortunately missing from the map I got from Metro Transit’s website).  Employees or visitors to the hospital who get off at 22nd Ave can take 6th St S.  People going to the medical center can walk down calm 4th St S to 20th Ave.  This plan may be a bit drastic for some, but I believe would be common in much of the world with better transit systems than here.  Hard to see what the point is, though, if all those stoplights remain.

Finally, I’d like to reproduce my advocacy emails regarding this project:

I couldn’t make it to the meeting last night but I hope it isn’t too late to comment on the latest revision to the Riverside Ave layout.

First, I’d like to say again that this is a good design that offers significant improvement to existing conditions.  Further, the incorporation of accommodations for all modes of travel is a major leap forward for the city of Minneapolis and hopefully will set a standard for future designs.

However, I have to point out that the 8′ width of the sidewalk on the north side of Riverside just east of Cedar is not only too narrow for the pedestrian traffic at this corner, it ignores the city’s adopted policy as I referenced in comment 1 in my previous email.  8′ is not even close to the 15′ “acceptable” minimum, and will create dangerous crowding on this busy sidewalk, and will discourage people from choosing to walk for transportation in this area.

Thanks again for your work and I hope you will consider my comments.