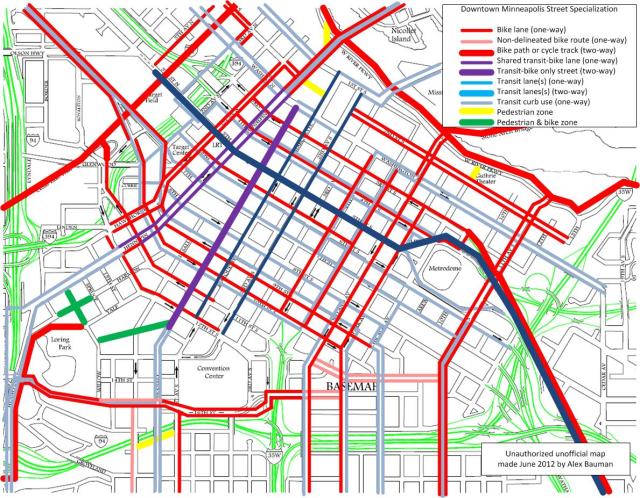 Actually, if that was your goal, you might as well use Hedberg‘s amazingly comprehensive yet readable official Minneapolis Bike Map, which shows transit (although it doesn’t differentiate between Hiawatha, which is mostly separated from traffic, and a bus that runs in mixed traffic).  My goal was more theoretical – I just wanted to see at a glance which streets had been specialized for which modes.  I used Visio to alter a base map created by Public Works that was the most detailed map I could find in black & white.  Color was used to differentiate between the different modes in which the streets specialized, and line thickness was used to show degree of separation from other modes, which in Downtown conveniently corresponds to directionality (i.e. all of the separated facilities are also two-way; the old two-way bike lane on Hennepin would have been more complicated to symbolize).  I also included pedestrian specialization, which I considered to include bikes unless specifically banned (as on the typically deserted Fed plaza) or physically prevented from using the space (mostly because of stairs, like on Chicago’s connection to West River Pkwy).  Because Public Works’ attention is defaulted to car traffic, the base map included freeways in light green – luckily they are another form of specialization, but they don’t conform to my symbology.

Now that I’ve made this map of street specialization in Downtown Minneapolis, here’s some thoughts on the transportation network:

I’d like to pin a tangential coda onto this already long-winded post.  From the above it can be gathered that there is already a great deal of specialization on Downtown streets but I’d like to add even more.  To understand why, I offer the chart below, showing that the population of Downtown as measured by the 2010 census is greater than all but 25 of the Metro’s 90-some municipalities: 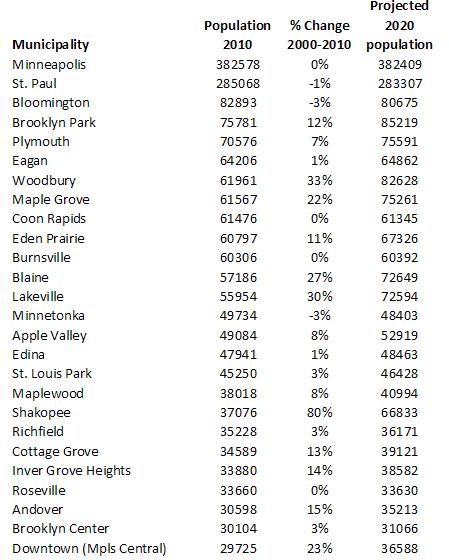 Ok, so # 26 wouldn’t seem to be a big deal, except for the fact that at 2.6 sq mi Downtown is a third the size of the next smallest city on the list, Richfield.  In addition, only 5 cities on the list had a similar or higher growth rate to Downtown, which is poised to overtake Brooklyn Center, Andover, Roseville, and Richfield assuming the same growth rate in this decade.  Of course, that won’t happen, but if the first two years of this decade are any indication, it’s certain that Downtown’s growth rate will outpace all but a few of the Metro’s large municipalities.

High population in a small area means density, something that isn’t very common in the Twin Cities.  That means we should expect the transportation system to look different Downtown as well, and a reasonable response is to specialize street space so the different modes can perform their best.  Unsurprisingly I have an idea of what the ideal specialization would look like, and I’ll get around to posting that map sooner or later.

5 comments on “Every street is special”