The May 17th Zoning & Planning committee meeting is packed with some big ticket items.  If you’re like me, you’ll want to get your email pen ready to pester your council member about this stuff (assuming your council member is on this committee, that is – if you live in one of the seven wards whose council member isn’t on Z & P, you don’t get a voice).  Dock Street is once again on the agenda, along with the A Mill, Peavey Plaza, and a certain revolutionary. 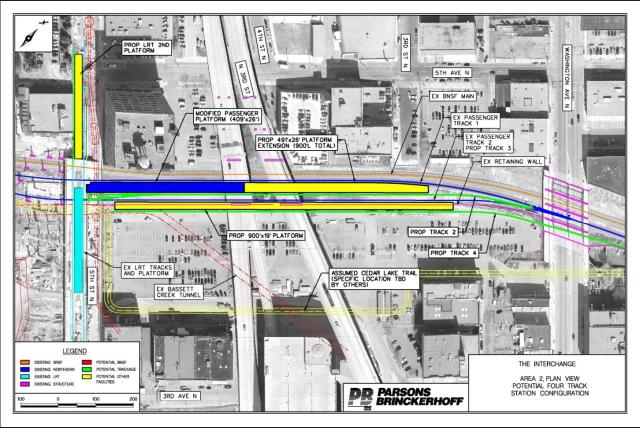 Conceptual track/platform configuration from The Interchange Final Study from 2010

Dock Street is the most directly transportation-related of the four items, since the basis for the appeal by Hennepin County and MnDot of Hines’ proposed apartment complex is that the layout will constrain options in the rail corridor currently used by Northstar and proposed for use by several other future lines.  Action has been postponed for more than a month, but the recent Strib story makes it seem like they’ll actually act on it this time, possibly because Hines made a stink about the delay at the last Z & P meeting.  They have a point, as Hennepin County has known since 2006 that the Interchange was their preferred location for the hub of Minnesota’s rail facilities, and MnDot was given the opportunity to comment on the project in August of 2011 and at that time said only “No formal comment.”

Peter McLaughlin called this a “Kmart moment” with some hyperbole; it’s not clear that the apartments and the rail facilities are mutually exclusive, and based on the 2010 Interchange study it looks like the trail would have to cross Washington at grade anyway.  In that case I would tend to favor allowing the apartments to move forward; for me and others who use the trail to access Downtown an at grade crossing at Washington would actually improve the trail, which currently has awkward access to the area.  It seems like only recreational users would suffer from a grade crossing, although that would also make the trail more expensive to reconstruct.  It also seems like the Interchange is barely feasible due to the tightness of the site anyway, so it may be more worthwhile to spend the money that Hines would have extracted for further easements on a new study of passenger rail station possibilities in Minneapolis.

I hope they know what they’re doing – this would have been a great place to drink a beer.

The A Mill project in this initial phase is merely a reuse of a historic structure; this sort of development typically requires a lot of variances because historic structures were usually built before the zoning code was adopted, but since the structures already exist, these variances tend to be less controversial than they would be for a new structure that’s built to look like a historic structure.  From what I can tell from the complicated site plan, only a couple small additions would be made to the existing A Mill complex to accommodate a parking structure that would somehow be wedged into the center courtyard and mostly buried below the existing ground profile.  So here we run up against the City’s annoying practice of not publishing the actual appeal being heard in the Z & P meeting, and our only clue to the reason for the appeal is that the appellant is Kathleen Flynn Peterson.  They tossed us a bone in the form of the Planning Commission minutes, where Ms Peterson complained at length about the City’s process and made no comment on the form or use of the structure, which is the only thing the Planning Commission (or its appellate body the Z & P committee) has any say on.  As I mentioned last week, I have wistful feelings for the potential of past proposals for this site, but the only thing I don’t like about the current proposals are that they seem to waste the commercial potential of the location on the only beautiful street in Minneapolis.  My guess is this appeal will be denied, and the only significant hurdle the A Mill redevelopment will face will be at the Community Development committee meeting where the project’s financing will be debated.

Peavey Plaza‘s last stand will be taken at the May 17th Z & P, where an appeal from Steve Kotke, the director of Public Works, will seek to overturn the Historic Preservation Commission’s decision to delay the demolition of the architectural gem for six months.  It’s sort of ironic that the City is now trying to destroy a historic resource that it claims is too expensive to rehab because it neglected to properly maintain it for decades, basically the exact situation for which the City created the Historic Preservation Commission, obviously thinking only of when slumlords do it, not major corporations/campaign donors.  My guess is that staff is too busy pretending that the bland proposed replacement has anything to do with the serene original to notice the irony.  It may not surprise you that I’m opposed to the demolition, but I expect the appeal to be upheld and our last chance to enjoy Peavey Plaza to arrive shortly.

A substandard, tax-forfeited lot fit for a founding father

Emiliano Zapata probably isn’t used to being the least controversial one around, but at this Z & P committee he may be.  But don’t worry, Emy, that doesn’t mean you’re the least interesting.  Apparently a statue of the founding father of the modern Mexican republic was donated to Minneapolis by the state of Morelos, home to our sister city of Cuernavaca, but no place was ever found for it and it seems to have languished in a supermercado up till now.  Soon it will join such luminaries as my first love Mary Tyler Moore and popular 19th century violinist Ole Bull and be displayed in a public space, a narrow tax-forfeited lot at 12th and East Lake.  But is .08 acres really enough space for this huge figure in the history of our neighbor to the south?  It seems like this might be the ideal place to create Minneapolis’ first reclaimed street plaza.  12th Ave S has T-alleys on both sides, so car access can still be preserved.  Just use planters to block off the space between the alleys and Lake St and you’ll have something closer to the grand plaza Zapata deserves (but small enough to program the smaller, temporary uses suited to reclaimed space without feeling too empty).

More space to roam for Zapata

Reclaiming street space for recreation and biking and walking?  Sounds like I tied it back in to transportation.  Viva Zoning and Planning!

7 comments on “Viva Zoning and Planning!”