I often joke about how St Paul is a suburb of Minneapolis, but it’s always been in jest, a gentle sibling ribbing.

That was until I took a bike ride on Wheelock Pkwy last weekend.  This road, marked as an on-street bikeway on St Paul’s official Bike Map, doesn’t have a single bike facility.  Not a lane, not a sharrow, no little bike symbols painted on the pavement, just a few faded signs every mile or so proclaiming it a “Bike Route.”

Wheelock Parkway seems to have been built around 1920 (it appeared on a Hudson map from 1922, but not on a Blue Book map from 1920) as one of the inter-war period’s recreational driving parkways.  If there were park facilities along the road at one point, they’re gone now, although a long segment of the road follows a wooded bluff, making it feel sorta park-y.  Wheelock is built for driving, and although maybe drivers were able to keep their speed down in the 20s, when they were still afraid of driving so fast their faces would peel off, no such fear lightens the feet of today’s motorists, who speed down Wheelock with only rare stop signs to slow them.  If you’d prefer to traverse this parkway at a leisurely pedestrian pace, then tough crackers, Mrs. Grundy, because the so-called parkway is even missing sidewalks for most of its length.

Wheelock proves the old joke about parking on a driveway and driving on a parkway – there is no parking allowed anywhere on it, and although the roadway is narrow – 30-35′ at various points – my guess is there would be room for 5′ lanes along the entire route.  But why settle for on-street facilities?  Apparently to justify calling a parkway, Wheelock has exceptionally wide setbacks for most of its route – the ROW varies between 120′ and 130′, which means there’s a 40′-50′ strip of public land on both sides of the street that could be used for a two-way path or a pair of one-way cycle tracks on either side. 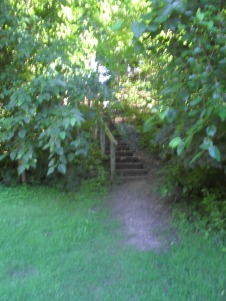 Drag your bike up here

But a few bad eggs don’t make the St Paul omelet, and there’s some really nice biking in our neighbor to the east.  In fact, two trails cross Wheelock Parkway, and by “cross” I mean it’s difficult or impossible to get to them from Wheelock.  At the Gateway Trail, which may be the premier non-river East Metro trail, someone was kind enough to build a wooden staircase from Wheelock to the above-grade trail.  A nice gesture, maybe, although a strange choice considering this segment of Wheelock doesn’t have a sidewalk.  Kitty corner to the staircase for no one is a strange stub extending down from the trail towards Wheelock but terminating mysteriously before reaching the Parkway pavement in a kind of overlook, as though anyone would want to sit there and enjoy the view of nothing.  But at least there is an indication that the North End‘s only east-west “bike route” is intersecting with the Gateway Trail.  The Trout Brook Trail passes under Wheelock with nary a whiff of spray paint pointing to it.  Granted, it’s at the bottom of an impressive gorge that Wheelock overpasses, and the Trout Brook Trail is just a short segment so far.  But as St Paul grows up into an adult biking city, it’ll have to figure out how to make the connections between bike facilities intuitive.

Can't you think of a better place to nap?

Luckily, St Paul is growing up, and it’s working on a Bike Master Plan that vaguely promises some kind of real improvements, and we’ll find out what exactly sometime around New Year’s.  Presumably there will be recommended connections of their existing randomly-strewn network, maybe an instruction to city employees to avoid parking in bike lanes, and – dare we hope – proposals for actual bike facilities on existing designated bike routes like Wheelock.

The cool thing about St Paul is it’s actually not bad biking most places in the town already.  The car traffic is light compared to Minneapolis, and most roads are 3 lanes, tops.  I was cruising around downtown on Sunday with no problems.  One downside – they have these things called hills that are kind of annoying, but they can be fun, too.

So I guess I have to hesitate to apply the epithet of suburb to St Paul.  And maybe St Paul is less of a baby brother, and more of a weird, reclusive older brother that you have drag into the latest fashions.

…the guy on the Nice Ride bike yelled at me as he rode past me walking down the sidewalk near my apartment.  I only had a split second to wonder if the guy was bragging or just proud that his city had the organizing power and progressive spirit to pull together a system that’s simultaneously environmentally friendly, egalitarian and fun before the guy emitted a follow-up yell, “Your shirt!”  Oh yeah – there was a nice girl who works for Nice Ride on the sidewalk with a prize wheel a few weeks before, and I’d spun a shirt – which, being comfortable and stylish, quickly became a favorite of mine.

Funny thing is, this was the second time that day someone had yelled “Nice Ride!” at me – the first was from the lips of a shirtless young cyclist behind me as I prepared to curse the old fat man who was driving through in Hennepin’s green lane, until he came across a bus at a stop and decided to hold up the cyclists who were legally riding in the lane so he could pass the bus.  In fact – and I’ve heard this from other regular Nice Riders – it’s not uncommon for people to yell “Nice Ride” as you cruise by on those green flashing cushiony bikes.  People really seem psyched about the Nice Ride.

I gotta admit, though, that I’m getting a little less psyched.  Yesterday was also the second time I’ve arrived at a station to discover an empty corral, which in this sprawling city means a 5-10 minute walk to the next station, and further on the Northside or in St Paul.  Last summer I also rode Nice Ride regularly, and never had a problem.  Maybe it was just bad luck, or maybe the Nice Ride is surging in popularity or maybe – and I think this is most likely – they’re just expanding a bit beyond their capacity lately.

It looks like more bikes are on the way, but it would have been wise to wait until they were here before adding all these new stations.  Based on the numbers from Nice Ride, the original 65 stations were stocked with 700 bikes.  With the stations added this week, there are 95 stations stocked by 800 bikes (apparently only one bike was lost last year, so I’m assuming few were lost this year), 30% fewer bikes per station.  When the 500 new bikes come in and the 2011 expansion is finished, the ratio will be much closer to the opening, with 116 stations stocked by 1200 bikes.  At that point I’ll be more likely to shout “Nice Ride” back to the bros. 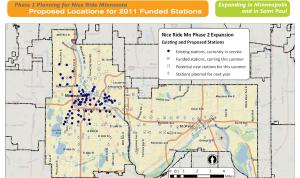 Coming soon to a sidewalk near you

Drunk Engineer reminds us that today is Malaise Day:

In a nation that was proud of hard work, strong families, close-knit communities, and our faith in God, too many of us now tend to worship self-indulgence and consumption. Human identity is no longer defined by what one does, but by what one owns. But we’ve discovered that owning things and consuming things does not satisfy our longing for meaning. . . .

I’m asking you for your good and for your nation’s security to take no unnecessary trips, to use carpools or public transportation whenever you can, to park your car one extra day per week, to obey the speed limit, and to set your thermostats to save fuel… I have seen the strength of America in the inexhaustible resources of our people. In the days to come, let us renew that strength in the struggle for an energy-secure nation.

It seems especially fitting as the smoke clears in the latest battle of Minnesota’s Budget Wars, and the Republicans, whose secret weapon is a credit card that pays off other credit cards, seem to be the ones standing.  Jimmy warned us about this 32 years ago:

What you see too often in Washington and elsewhere around the country is a system of government that seems incapable of action. You see a Congress twisted and pulled in every direction by hundreds of well-financed and powerful special interests. You see every extreme position defended to the last vote, almost to the last breath by one unyielding group or another. You often see a balanced and a fair approach that demands sacrifice, a little sacrifice from everyone, abandoned like an orphan without support and without friends.

We are at a turning point in our history. There are two paths to choose. One is a path I’ve warned about tonight, the path that leads to fragmentation and self-interest. Down that road lies a mistaken idea of freedom, the right to grasp for ourselves some advantage over others. That path would be one of constant conflict between narrow interests ending in chaos and immobility. It is a certain route to failure.

I guess we chose the route to failure, and pretty soon there won’t be a bus that can take us back.

he hath bore me on his back a thousand times